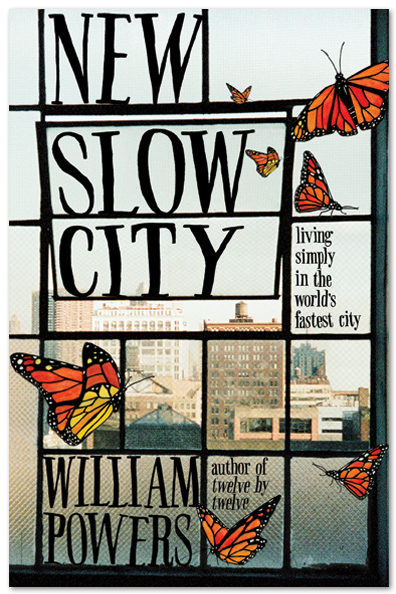 This book review was written for The Refugee & Immigrant Fund in January 2015 and originally appeared on their blog, Growing Together.

In recent years, the concept of living “Slow” has been gaining ground, in many ways a natural response to the ever increasing hyper-connectivity and competitiveness of our modern world. Slow food, slow travel, and slow parenting are just a few outgrowths of this desire to take back our time and live responsibly on the planet. We’re joining yoga and meditation centers in increasing numbers to learn how to “be in the present,” and you’re as likely to hear the word mindfulness bandied around the boardroom as the ashram.

But what about us urbanites; how to live Slow in a place that is inherently Fast? Especially in New York — perhaps the fastest city of all — where there’s so much to do, the rent is so high, and the competition (both social and economic) is too fierce to ever slow down? This is the question William Powers tries to answer in his new book, New Slow City: Living Simply in the World’s Fastest City.

Powers, a senior fellow at the World Policy Institute and NYU adjunct professor, is best known for his memoir Twelve by Twelve, a Thoreau-esque account of living off the grid in a cabin in the North Carolina woods. (The cabin was recreated as an art installation last year at the Queens Botanical Garden, a project RIF helped make possible). In New Slow City he sets out to prove that Slowness is less about geography than mindset — and does so by living out his Twelve by Twelve values in downtown Manhattan, a contender for most hectic place on the planet.

Powers and his wife downsize from their Queens townhouse to a tiny Greenwich Village micro-apartment, trimming their possessions down to the bare essentials. The year becomes an experiment in living slowly and sustainably — work hours are slashed to provide maximum free time, relationships are cultivated with other New Yorkers pursuing the “Leisure Ethic,” and the city’s “wild edges” are sought as places of escape and solitude. Even our friends at the Brooklyn Grange make an appearance, hailed by Powers as a green oasis towering over the concrete.

Two themes crop up consistently throughout the book: the idea of the urban feral (acknowledging and appreciating the city’s wild corners), and the never-ending onslaught of advertising we’re subjected to, even unwittingly. Powers details a subway encounter with “guerrilla marketers” promoting a new app; he follows the hipster duo from subway car to subway car as they replay the same conversation over and over, in the hopes that passengers will overhear them and download the product. Being more mindful of omnipresent advertising and seeking simple satisfaction in interactions with urban nature are two of Powers’ strategies for slowing down and reclaiming some independence.

New Slow City is more memoir than how-to book, though it’s easy to take lessons away from Powers’ anecdotes and apply them to your own experience in the city. There’s also a wealth of recommended reading for those looking to delve deeper into the Slow life: Shannon Hayes’ Radical Homemakers, on domesticity; Ester Perel’s Mating in Captivity, on urban parenting; and Arturo Escobar’s Encountering Development, on the developing world, have all made their way onto my reading list.

For all its fast-paced insanity, urban life can still be mindful, holistic, and sustainable. In fact, as more of us choose to live in cities, deeper connections with nature and neighbors will be key in staying healthy and happy. Powers’ experiment in New Slow City shows that not only is this possible in the heart of a bustling metropolis, but could radically improve the quality of urban life.