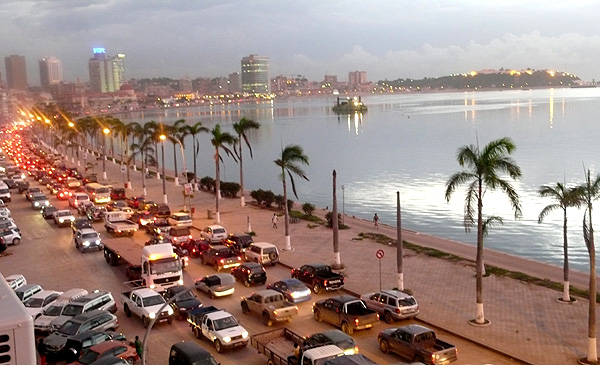 Luanda — a city I’ll probably never see, but which for whatever reason exerts a very strong pull on me.

Other places have had the same effect; I’ll know next to nothing about them, have zero practical reason for ever visiting, and yet something about them — the idea of them — stays lodged in my brain. Argentina was the first, and five years and two extended visits later I still can’t fully describe what keeps pulling me back. Eritrea, a tiny sliver of a country fusing Italian, Islamic, and Ethiopic culture is another that has seized hold of my imagination. Hokkaido, Suriname, Cuba — why do these places fascinate me so much? Echoes of past lives, maybe? Or something more mundane, yet equally difficult to put my finger on?

At least with Luanda I have some idea of when the seed was sown: reading about the cramped, stifling, beautiful colonial city in Ryszard Kapuściński’s Another Day of Life, a slim but entrancing little book which I’ve returned to more times than I can count. With each reading the city grows a little more real, never mind the fact that Kapuściński is writing about the Luanda of 1975, a Luanda long gone…

In 2009 my Journalism 319: Foreign Correspondence professor introduced our class to Kapuściński, the Polish journalist who, throughout the Cold War, scrambled across the Third World blending reportage with magic realism, describing the horrors and wonders of the world like an endearing Polish grandpa telling stories by the fireplace. I read his assigned book — The Shadow of the Sun, a journey across post-colonial Africa — and then moved on to his work on India, the Soviet Union, Iran, Ethiopia, and Latin America, stopping only at those books that hadn’t been translated yet from the Polish (of which there are still over twenty).

I had been diligently making my way through Kapuściński’s work (although maybe “diligently” isn’t the right word — reading Kapuściński is effortless, like listening to a friendly storyteller) when our professor mentioned that, by the way, the great reporter was dead — had died two years earlier. It was like discovering an album, getting lost in it, only to find out that the band broke up ages ago; you’ll never see them in concert and they’ll never make new music. You discovered them too late, and suddenly you feel as if you’d been listening to a ghost all that time.

Ghost or not, Kapuściński had become a friend, and I spent most afternoons that following summer in the shade of my backyard with the New York Times, a pot of coffee, and his books piled on the table, fueling my fantasies of becoming a foreign correspondent.

Another Day of Life, of all Kapuściński’s books, has always resonated most with me; reading it I can hear the nasal lilt of Portuguese,  feel the dry, dusty breeze blowing in from the desert, see the lights of the ships in Luanda Bay at twilight. The book describes the outbreak of the Angolan Civil War after the left-wing Portuguese government of the ‘70s, feeling guilty about the country’s 500-year history of colonialism, suddenly decided to cut its colonies loose. “Here,” they told Angola, Mozambique, Timor, Guinea-Bissau, “you’re free.” And then they left, the white colonial population fleeing to South Africa, Portugal, and Brazil to escape the ensuing chaos.

(I made the mistake of wearing an Angolan football t-shirt on my one and only trip to Brazil, soliciting unfriendly stares and smirks as I wandered down Porto Alegre’s gray, misty streets; I realized later how many of the Brazilians I’d passed might actually have been transplanted Angolans, old colonialists uprooted after generations in Africa and forced to start again in South America).

For 30 years Angola tore itself apart in one of the longest-running conflicts of modern history, a civil war few people have ever even heard of. Refugees from the countryside — descendants of those same tribes that had defied the Portuguese conquerors throughout 500 years of continuous warfare — fled to Luanda for safety, a fortress city on the shores of the South Atlantic. They swelled the city’s population — about half a million poor shantytown Africans and the Portuguese who didn’t get out in time — to over three million inhabitants today. That number is expected to grow to nearly nine million in the next ten years. As Africa urbanizes, Luanda will become a megacity on a continent of megacities; I wrote about the challenges it faces here, as a way of better understanding this distant place I feel so drawn to.

I don’t always understand why certain places plant themselves in my thoughts and occupy my daydreams; I can only hope to travel there someday and try to find out. And if that isn’t possible in this lifetime, I’ll settle for reading about them with guides like Kapuściński. I’ve never been to Luanda. On a 4am layover in Rio de Janeiro I saw a single, lonely direct flight to the African city, blinking on the Departures screen like a new voicemail (a voicemail left by a ghost?), and I briefly fantasized about changing my ticket — that may be the closest I ever get.