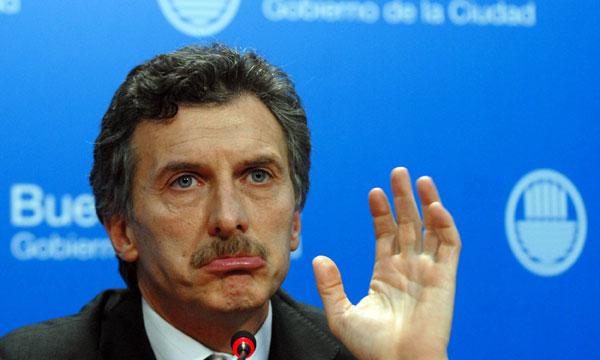 Politicians the world over are an unending source of both frustration and, thankfully, humour. While they may often infuriate us with their

incompetence, ignorance, or foolhardiness, sometimes you just have to throw up your hands and try to laugh about it (as a North American, I’ve had lots of practice – how else do you think we survived eight years of Bush, Jr. without going mad?).  But let’s face facts – the antics of some country’s politicians are just slightly more off-the-charts than others. A Silvio Berlusconi, for example, is more entertaining to the passive observer than a Fredrik Reinfeldt (Prime Minister of Sweden, described as “gentle”, “pensive”, and “soft-spoken”). The United States’ Tea Party is more likely to provide comic relief and/or forehead-slapping anger than, say, the pragmatic Green Party of New Zealand.Argentina’s politicians, I think it’s safe to say, regularly cross over into the realm of the absurd, forcing us all to scratch our heads and ask ourselves “…Really?” Left, right, centre, or so vague as to encompass characteristics of all three, politicians of all stripes and ideologies ensure this country’s news cycle is never boring. From Socialist governor Hermes Binner confiding to Perfil reporters that he sleeps in the buff, to city legislator Gabriela Cerruti tweeting photos of her marijuana plant, 2012 was replete with ‘WTF’ moments; these are just a few.

Some are humorous, some controversial – all are quite ridiculous. In chronological order, we present the Top 5 Argentine Political Gaffes of 2012.

When provincial teachers throughout the country jeopardised the start of classes in March for being unable to agree on salary demands, President Cristina Fernández de Kirchner expressed her displeasure.

“How is it possible”, she asked legislators, “that we only talk about salaries, but we don’t talk about the children who are missing class?”

A reasonable question. But her following statement was one that, the world over, grates on teacher’s ears like chalk on a squeaky blackboard. “I mean, they only work four hours a day and get three months holidays every year!”

Cries of anger and injured pride rang out from faculty lounges across Argentina. If there’s one thing teachers hate, it’s the ‘three month holiday’ charge.

“I’m…unpleasantly surprised by the president’s comments”, said a deeply hurt Roberto Baradel, leader of the Suteba teacher’s union. The unions then called for a 48-hour strike, exacerbating the problem and bringing joy to schoolchildren throughout the province.

By kicking off the legislative year alienating an entire profession in a matter of seconds, this presidential gaffe makes the list. Were there other, more controversial Fernández moments in 2012? Probably. Share your favourites in the comments section.

Buenos Aires Mayor Mauricio Macri of the Propuesta Republicana (PRO), the hope of the Argentine Right, “good old boy” and potential presidential candidate, is no stranger to gaffes and controversy. Whether he’s destroying sculptures at the ArteBA festival, or teasing porteños with access to legal abortion (in cases of rape or life endangerment) only to veto the measure mere days later with little explanation, the man is always up to something.

A recurring theme, though, is Macri’s tendency to disappear at inopportune moments. Football matches in Córdoba and KISS concerts at the River Plate stadium have all lured Mauricio away from his downtown office, like a rebellious teenager skipping class for something more exciting – except “class”, in this case, is the governance of Buenos Aires.

The most infamous example came during Easter Week when a massive storm hit the capital and surrounding area, causing major flooding, power outages, property damage, and leaving 17 people dead. Macri’s whereabouts throughout the debacle remained unknown, until celebrity magazine ‘Hola!’ published photos of the mayor and his family vacationing in the lakeside town of San Martín de Los Andes, far from the chaos affecting the city and suburbs.

“Tennis, golf, and relaxing with family”, ran the headlines beside photos of Buenos Aires’ first family descending from their private jet. The sheer number of memes spawned by the incident warrants it a place among the top gaffes of the year.

Poor Vice President Amado Boudou – as if being investigated for influence peddling and illicit enrichment wasn’t enough, the Anti-Corruption Office had to butt in on his divorce proceedings, as well.

It all began when Boudou listed his red Honda CRX Del Sol as having been purchased in July 1992 – one year before he and ex-wife Daniela Andriuolo were married – thus classifying it as a ‘personal asset’ rather than jointly owned, and its retail value safe from any divorce settlements.

And he would have gotten away with it, too, if not for Authentic Socialist Party (PSA) Secretary Mario Mazzitelli, who apparently had nothing better to do than track down 20 years’ worth of the car’s paperwork. “That car wasn’t even in Argentina in July, 1992”, he pointed out.

Boudou, charged with falsifying his divorce affidavit, was forced to change his story twice before ultimately omitting the troublesome convertible from his assets entirely. The search for the truth about Boudou’s Honda continues.

The 20th November national strike, instigated by heavyweight union leaders Hugo Moyano (General Labour Confederation) and Pablo Micheli (Argentine Worker’s Union), brought much of Argentina to a standstill, affecting schools, banks, airports, the subway, hospitals, and just about every other sector necessary for a country to function. Even many of those not participating in the strike were prevented from going to work by strategically placed roadblocks.

On the surface, Buenos Aires seemed like a ghost town. But behind the scenes, some furious tweeting was taking place.

It began innocently enough, with @infocamioneros (the Twitter handle of Moyano’s truck driver’s union) throwing the first punch. “Aníbal’s whipping up some instant coffee over at the Casa Rosada b/c all the waiters joined the #20N national strike”, they tweeted gleefully.

The moustachioed senator and stalwart Kirchnerist lost no time in delivering an eloquent response. “You dumb ass, I work in the Congress”.

Then began the war of words in earnest. The Camioneros proceeded to call Fernández (in all capital letters, mind you) a “servile doormat” to the

president, as well as “pajarón” (meaning “stupid” or “ineffectual”; translations differ). Fernández retaliated: “At least I’ll never be a pimp like your boss. Bootlickers of the enemies of the workers!” He then mustered all his adult restraint, and blocked their Twitter account.But hostilities still did not cease. The Camioneros (who gained over 4,000 online followers that day) began circulating the image of an “Angry Bird” sporting Fernández’s moustache; the hashtag #AngryAnibal took Twitter by storm.

In a press conference the next day, apparently still peeved, Fernández told reporters “We [the Kirchnerists] are not going to change just because the traitor ‘Augusto Timoteo’ Moyano held a strike”, referring to union leader Augusto Timoteo Vandor, assassinated by left-wing forces in 1969. At which point the situation lost all humour. Too far, Aníbal.

December in Argentina: a time for family get-togethers and end of the year celebrations before fleeing the cities for summer vacations on the coast. Nothing unusual about throwing a little asado and brindis for your co-workers to celebrate a good year, right?

Wrong, if said asado takes place on the grounds of a former clandestine torture centre and potent psychological symbol of the nation’s darkest chapter of history. The former Naval School of Mechanics (ESMA) operated as a detention and torture centre during the military dictatorship from 1976 to 1983, and during this brief but horrifying time nearly 5,000 people passed away either behind its walls or during notorious “death flights” (not including the tens of thousands murdered elsewhere in the country).

In Justice and Human Rights Minister Julio Alak’s defence, the asado (hosted on 27th December for employees of the Justice Ministry) was welcomed by officials of the ex-ESMA (which now functions as a cultural centre) and defended by such groups as the Mothers of the Plaza de Mayo. Speaking at the asado, Carlos Pisoni of the cultural centre said “Actions like these allow us to redefine this space that, during the years of state terrorism, functioned as a centre of torture and extermination”.

Others, understandably, were more than a little offended by the choice of location, citing insensitivity on Alak’s part and calling for his dismissal. Some likened the event to “baking pan dulce in the ovens at Auschwitz”.

In the end, Alak denied even throwing an asado, saying the Justice Ministry had simply gathered to discuss its 2013-2015 strategy, and that there happened to be food. “What we did was make some sandwiches […] so that people could stay on the property rather than go to some bar”, he explained on the television programme 678. “An asado at the ex-ESMA is a lie.”